I’ve always been the kind of student who went home on the weekends. And who could blame a girl? Campus is dead, there’s never ANYTHING to do… Or is there? This past weekend, I chose to stay in Raymond. This is a very rare occasion, but since I had a big paper to work on I figured I would save a little gas money. Now as nice as Allen Dukes Whitaker is, a girl can get very bored staring at four walls and a computer for hours at a time. Eventually I decided that I would go get some exercise and walk around the block for a little while. Not gonna lie, I was avoiding working on that paper.

So I get my sunglasses and headphones and head towards the center of Raymond. I pass Raymond Elementary, some houses, and observe the Catholic chapel. Across the road I stop to take a picture of the old and rusty railroad crossing light. 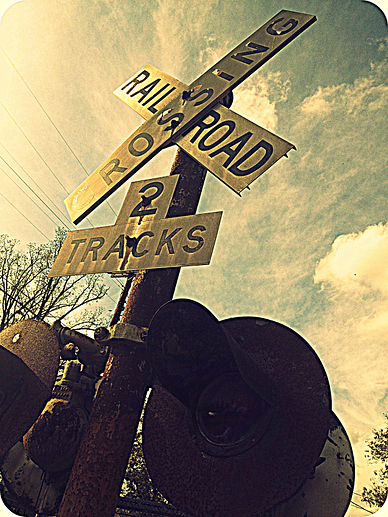 My attention turns to the depot. I’ve been in Raymond for three semesters now, and have always seen it but have never been inside it. I decided to go and take a look, since they are open on Sunday afternoons. It is now called “Little Big Store”, a shop for records and music memorabilia. I step inside and immediately to my right is an antique coke machine, where you can buy glass bottles of Coca Cola. And everywhere else I look are (literally) thousands of records! There are shelves upon shelves and stacks upon stacks of classic vinyl records. The walls are covered in posters, t-shirts, stickers, and anything classic music and even some new music. Raymond has a secret Rock ‘n’ Roll treasure trove! As I walk the store looking, satellite radio plays rock music. There are glass cases with memorabilia items with knit hats, wallets, jewelry, and more in them. There are shelves full of biographies and books written by famous musicians, some of them even signed with autographs. Moving further into the depot I see cassette tapes and CDs, as well as musical song books. The very front of the store was set off by bars, and two depot windows and a fireplace between the two. 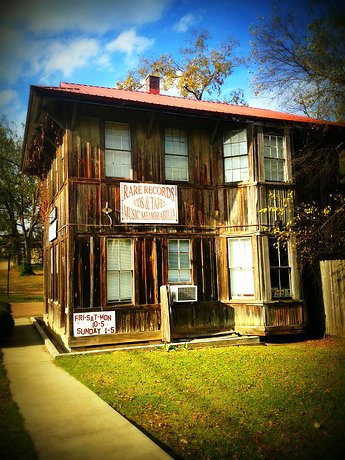 I immediately ask the little lady at the front counter if I could write about her little store. She told me this was the train depot of Raymond, and that the two windows at the front were windows separating blacks and whites from standing in line together to buy train tickets. Then she showed me an original bathroom door on the outside of the building. This door, although worn, chipped, and dirty, still left the impression of the words “COLORED MEN”. I have become enchanted with this little building. I’ve always loved anything old, antique, or historical. Once a place where people bought train tickets and waited for their departure, it now serves as another symbol of Raymond’s withstanding history and charm.

After taking plenty of pictures, I continued to walk on. How could I have been in Raymond for almost two years and never been in this place before? What else does Raymond hold that nobody knows about? This is such a valuable lesson for people… EXPLORE!  Little Big Store is a PARADISE for music fanatics and history buffs. I know that I will definitely be back to visit it again… but with money!