In Things to Do, College Life, Food, Jackson, Mississippi, Eat Out, Ratings, Restaurant 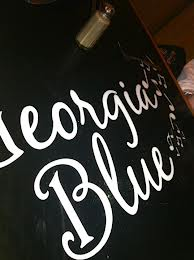 As a 24-year-old commuter student; living in Madison, MS and attending the Raymond Campus of Hinds Community College; the drive to class gives me ample time to think about the day ahead. On the 45-minute commute, both to and from school, I get hungry and I begin to think about good places to eat en route. The Jackson metro area is the culinary capitol of the state with thousands of varied options. Last week, during my search for gastronomical enlightenment, I saw a sign reading “Georgia Blue”, tucked away in the back of a shopping center. It’s a hole in the wall gastro-pub that holds true to the old south way of cooking while grasping a new way to present itself.

As I walked into Georgia Blue I was not greeted at the door, an unusual occurrence, but I found my way to a seat at the bar. The bar back, a bit cold, and seemingly busy was quick to take my drink order. "Water and sweet tea, both with lemon" I asked of him as he remained in a hunched over position. He appeared to be cleaning recently used glasses, left over from a local’s mid-afternoon beer, I’m sure. He brings me my drinks as I continue to scan the menu. I ask "May I please have a shrimp po-boy and a half dozen char-broiled oysters" He assures me that it will be right out. From my periphery I catch the motion of a near by television playing host to a local car dealership commercial. The classy kind that tells you about the cars and what you will get out of your purchase rather than the average "WE'LL MAKE YOU THE DEAL OF YOUR LIFETIME!" cheese ball TV fillers.

I begin to gaze around the restaurant, noticing multiple televisions; all of which carrying ESPN or a smaller network making a poor attempt to compete with the sports media conglomerate. The bar has a wonderful ambience. The back of the bar is open to the remainder of the place with a copper counter top, both cleaned and polished, but distressed with the aged look of water marks from glasses that so often tend to accumulate the condensation of melting ice in the Mississippi heat. It is an indoor restaurant, but in Mississippi an escape from heat and humidity can only be found under the cold wing of a southern winter. The six beer tap handles I find in front of me bring a spice of color to an other wise Delta Bluesy atmosphere, reminiscent of a speak easy I imagined Robert Johnson would have played in, The remaining ten tap handle went almost unnoticed due to a lack of vibrancy. Above the cooler and beer taps is a wooden mantle holding a rainbow of liquors, each using a family name or heraldic device to whisk away those seeking to find some peace in the bottom of a bottle. Two more TVs are above that.

It was no more than ten minutes I waited for my food. As I see another waiter approaching me with what appeared to be my food I couldn't help but get a little excited at the sight before my eyes. The oysters were served in a nickel, or possibly tin, tray with a fresh baguette two lemon slices and homemade cocktail sauce. The half shells were steaming and piled high with the perfect amount of Parmesan cheese that had been melted to a light golden brown. I turn to the Po-boy that lays next the oysters and realize that a poor boy never would have been able to afford this monster sandwich. The bread was like biting into a memory foam mattress, soft enough for comfort and freshness but firm enough for the support the large shrimp, lettuce, tomato, and accouterments that was stuffed between the slices. Inside the bread was a delicate smear of remoulade that yielded a hint of citrus, most likely lemon. The golden-brown sweet potato fries that played along as a good compliment were fried fluffy. They were a little limp but, more than a compatible sidekick.

The meal was hot, it was good, and there was plenty of it. Billy Crystal and his city slicker friends would have been proud. All in all the food was great and the portions were overly fair. My Meal was $25 dollars a bit steep, especially considering the service, but the flavor was worth it. The service was cold but certainly not lacking, the staff took care of my needs but not one of them was smiling. Would I go back? You can bet your sweet Georgia Blues on it!