Spring is usually a time for blue skies, green grass and maybe a little orange or yellow from hints of the barbecue chicken or hot dogs you might have eaten on Memorial Day.

But, in Mississippi, every few springs mean the appearance of a little red – the beady red eyes of the 13-year cicada, that is.

Yes, the birthplace of the blues and farm-raised catfish also boasts of the most populous cicada population in the United States, say state entomologists. Cicadas in the U.S. come in two broad varieties, one up north that’s on a 17-year life cycle and another down here on a 13-year cycle. Just three “broods”, in this case, types of cicada within the North American genus, of the 13-year variety exist in the world. And Mississippi is the only state where all three broods occur, according to an update published in March by the Mississippi State Extension Service and written by Blake Layton, an entomologist with the extension. The Magnolia State is home to “Brood XIII” (yes, these things are Roman-numerated like the Super Bowl) which emerged in much of the state’s western half. Each brood takes 13 years to complete a generation, but each of these three broods is on a different emergence schedule, Layton wrote.

Myself, I’m not afraid of these awkward-flying members of the insect world. Decades of research says they don't usually use the same tubular mouthpart they use to suck sap from a tree to bite a person, which is a good thing. I’m not much into pain and swelling! I can’t say the same for many of my co-workers, who went running at the sight and shivered at the thought of too many of these things in big numbers.

On and around the Raymond Campus, the sights, sounds and reactions to them were unmistakable. It began May 6 at the Golf Fun Fest at Eagle Ridge Golf Course, when I saw the first winged oddity of the season. It interrupted my conversation with multimedia specialist Melanie Boyd as festivities begin, causing her to panic a bit. That one's pictured below, and, judging from the lazy wing, is lucky it landed anywhere.

Evidence of the cicadas was everywhere at Eagle Ridge, mostly by the hundreds of small holes seemingly drilled in the hard grounds away from the golf course. This is where the insect emerges from life underground for 13 years, all the while feeding on tree sap.

Later, as Dr. Debra Mays-Jackson, vice president for the Vicksburg-Warren and Utica campuses, perused the event’s raffle items, they made their presence known again. A pair of cicadas landed opposite one another on a wooden bench near a gas grill being raffled off. The professional campus veep could only muster a concerned, puzzled face at the two insects, who appeared to re-create a stare-down from a Western movie.

The low hum of the cicada’s mating call – the result of the insect contracting its muscles to bend noise-making tymbals on each side of its abdomen – continued the following night as Hinds hosted the MACJC baseball tournament. Eagles spread their wings on the diamond nicely that evening as Meridian was vanquished, 6-2. But, the cicadas owned the night. Here’s a pic I managed between groups of people leaving after the final out. They know how to avoid a foul ball, evidently. 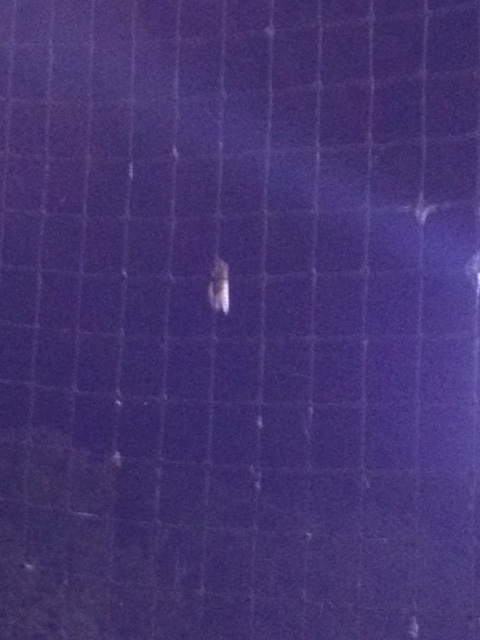 Brood XXIII’s spread this season isn’t limited to Mississippi. Researchers say the gray-bodied, golden-winged insects will be seen this year in much of the Lower Mississippi River system north into Indiana. It’s likely to be a region full of people mimicking longtime PR employee Tammi Bowles’ assessment of the natural phenomenon – “kinda freaky and scary – and so loud!”

A quick postscript to this creepy-crawly blog. I’d much rather encounter a cicada than one of these wee beauties below. Got two of these menacing yellow jackets in my apartment in the span of a week. These things pack a sting that can ruin your weekend, I’m told. One thing’s for sure – it’ll be a while before I can watch one of those killer insect movies from the 1970s again. 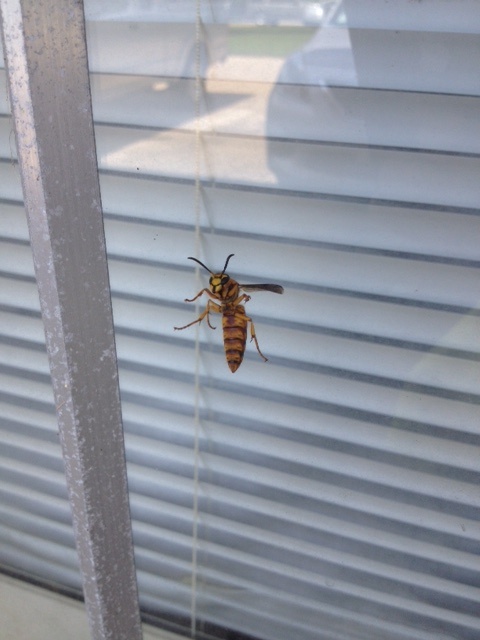