A season for the arts

It was a time for music and drama this past spring at Hinds Community College.

I had the rare chance to enjoy two such examples staged on the Raymond Campus this semester. Rare, that is, in that I was able to enjoy them after-hours from my job as Communications Specialist and merely as a member of the public. In both cases, talents were on display that would surprise the general public to know it was produced by community college students and not grizzled veteran musicians and actors. 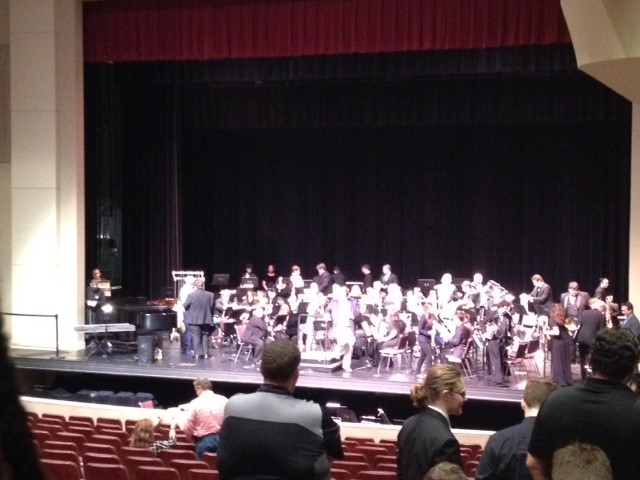 On March 25, the Mississippi Intercollegiate Honor Band took the stage at Hogg Auditorium inside Cain-Cochran Hall. It was made up of students from four Mississippi community colleges, including Hinds, and directed by Roy E. Cramer, a former longtime band director at Indiana University. A crowd of about 75-100 people was treated to an afternoon of scintillating, classical pieces from the wind ensemble and, later, some cool jazz riffs composed by the genre's most legendary names from the All-State Jazz Band pictured above, made up of students from Hinds, Pearl River and Jones.

Being a former first-chair clarinet in high school, I appreciated seeing the upper woodwinds represented nicely by the dozen names listed on the program just for my old instrument. I must admit it was the percussion on stage that blew me away, with the booming tympani and concert bass for the band's rendition of "Symphony No. 4: Bookmarks from Japan," composed by Julie Giroux. The jazz band, directed by Mississippi native Bart Marantz, a longtime former high school band director in Texas and jazz educator, brought listeners back to the golden age of the craft with tunes from Lennie Niehaus, John Coltrane, Dizzy Gillespie and Thelonius Monk.

Hinds Director of Bands Shane Sprayberry can be proud of Hinds' hosting of the event this year.

On April 21, I took in the final presentation of a four-night run of "To Kill a Mockingbird," based on the landmark novel by Harper Lee. I'd read the novel in high school and seen the multiple Oscar-winning 1962 film it spawned, but hadn't seen a stage version of it. I left the theatre quite impressed with the efforts of the student actors, each of whom seemed to put a bit of their own personalities into the otherwise adults-only roles. 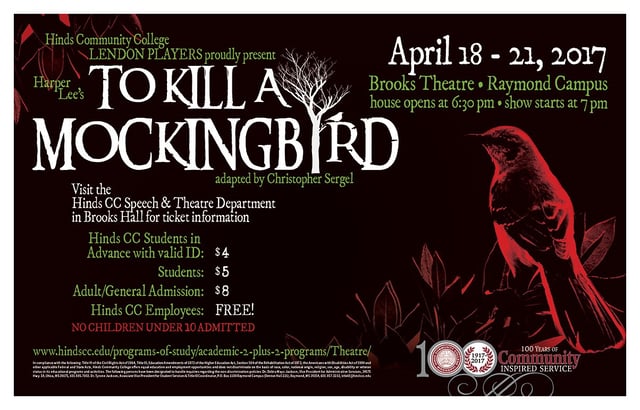 The dialogue was presented "in the raw" and captured the essence of every gritty line uttered in the movie, particularly the courtroom scene.  It was important for director Alison Stafford to keep the spirit of the setting true, and she and her entire support staff on the play are to be commended for an evening well-spent!

Can't wait for the next concert or play :)