An unexpected voice adds to leadership luncheon at Hinds CC

Surprises in the writing or reporting business can take on many forms – pleasant or not, they’re memorable for nearly all who do this for a living.

One such pleasant surprise happened Oct. 13 at a community leaders luncheon at the Jackson Campus-Academic/Technical Center. And I had a clue about it before the first guest sat down.

Dr. Sue Powell, the retired former vice president for the Jackson Campus-Academic/Technical Center and the Rankin Campus, appeared at this year’s annual event to the surprise of most in the room, including me. It was indeed her first public appearance since retiring last year. 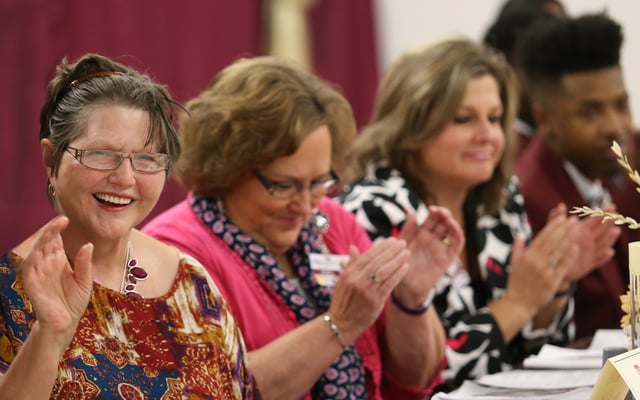 Her name wasn’t on the speaking program, and I had known her only through the mostly mug-style photos of her in the On Campus newsletter immediately after her retirement.  Didn’t take long, however, for my eyes to find a place card on a table marked “For Dr. Sue Powell and friends” when I first arrived at Room 155 at ATC’s Bivins Hall. I sensed Mayor Tony Yarber’s keynote address wouldn’t be the only item I’d end up writing about from this one.

She was given a small microphone at the start of the program and spoke for about 10 minutes about her stroke, her recovery process, friends at both campuses she led (“He’ll always be my baby,” she said lovingly of Campus Dean Dr. Leroy Levy) and about being in a room full of former coworkers once again.

“I feel like all of you are family,” Powell said. “I am so happy to be here today, and I commend all of you for supporting the M2M program. Thank you for allowing me to be a part of this today.”

To remind those like me who weren’t here during her 20 years at Hinds…she began her Hinds career at the Rankin Campus as marketing education coordinator and instructor in 1983. She moved to Florida in 1989 and earned her doctorate there, at Florida State. She returned to Hinds in 2001 as dean for career-tech education for the Rankin Campus and Jackson ATC. Two years later, she became VP for both campuses and directed Occupational Programs.

During her tenure, the Rankin Campus doubled its size at its main location, plus the Career and Technical Building was opened on a separate parcel south of I-20 in Pearl. Multiple programs expanded at the campus, including nursing, entertainment and media technology, and the Gateway to College program. At ATC, the M2M program grew up and is a vehicle for minority males to find the same path to success she once did.

“I am someone who dropped out of school,” said Powell, who took the community college route to a career in higher education. “I took the GED, but knew even then, at about 19, that it wasn’t worth anything without some job skills to go along with it.”

It’s a nice feeling to know a generation of students whose journey to productive lives had a chance to share their stories with someone who took the same road. I’ve interviewed several students in just a year and a half’s time who keep surprising themselves with every step they take in their education.

Doubly nice indeed, to have finally seen and heard the lady who helped build the impressive reputation for opportunity with a Hinds diploma.