Caleb Morgan is a freshman pitcher from Grenada. Caleb came to Hinds in hopes of improving his game and growing into a big-time Division 1 prospect. The moment he stepped on campus the baseball coaching staff could tell that he would be special. He was determined to improve each and every day and every time the ball was put in his hand, he attacked hitters and imposed his upper 80s fastball on them. Early on in the season, Caleb was tabbed the responsibility of being a conference starter. Last week, Caleb took the mound vs. Meridian Community College and pitched a complete game shutout. He struck out 15 batters in the process and was named MACJC and NJCAA Pitcher of the Week. 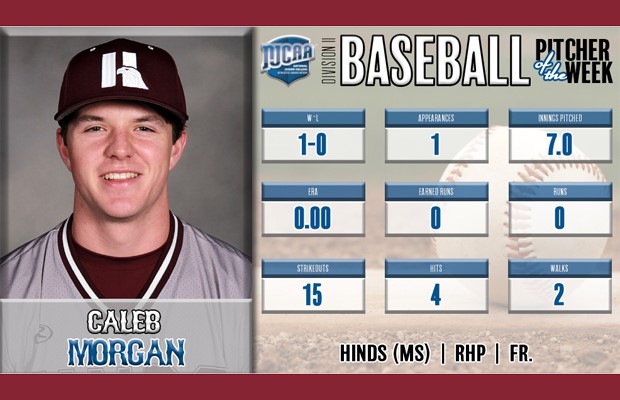 "Caleb is the ultimate competitor and has continued to get better every time he takes the hill. Tonight he was special. He competed in the zone with quality stuff against a quality opponent, and the results kind of speak for themselves. This was Caleb's ball game from the beginning and his ability to throw strikes allowed him to finish it," said Hinds Pitching Coach Nick Ammirati.

Our men's track program has dominant over the past few years and this year seems to be no different. The team finished fifth overall in the nation during the Indoor season. The Outdoor season has started off with a bang and members of the team have posted stellar times. The USTFCCCA has released the top times of the year in track which includes four-year schools as well. Keitavious Walter has the seventh best 100-meter dash time. Correion Mosby has the ninth best 200-meter dash time. Tyler Terry has the sixth best 400-meter dash time. The 4x100 meter relay team has the sixth best time.