Hinds wrapped up a series of 2012-2013 graduation ceremonies on June 6 with a special one for GED achievers in our district – adults who did not get a high school diploma by the traditional route but passed a battery of tests to get an equivalency certificate.

About 100 folks who may or may not have had a previous connection with our college came to celebrate their achievement with us. It’s always an honor for me to see the happy faces of the graduates and their family and friends at these ceremonies.

When my boss Colleen Hartfield, who oversees adult education, asked the General Education Development graduates who have already enrolled at Hinds to continue their education to stand up, about half of them did. Impressive.

Local attorney Jonathan Bullock did a fabulous job offering an inspiring message. Bullock dropped out of Clinton High School after a troubled adolescence, realized his mistake and got his GED. He started his college career with us before moving on to Mississippi State and getting a law degree at the University of Tulsa in Oklahoma. Yep, that’s right. From high school dropout to lawyer, with Hinds Community College a step on the path. 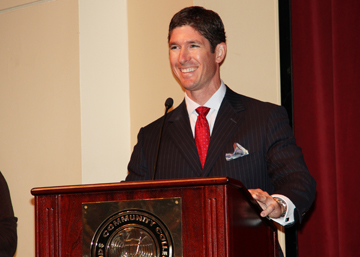 As an aside in his remarks, Bullock mentioned a talk by Frank Melton, then CEO of WLBT, he heard in the old Cain Hall (before it burned in 1998) during his first semester at Hinds in the early 1990s. He remembers it pretty well.

Frank, as he insisted everyone call him, gave a pretty kick-butt speech to young people, one that I heard a number of times in my years as an education reporter. He would swoop into an auditorium in his three-piece suit with a couple body guards. He’d give his speech, then to close it out he’d start a chant in segments and get the kids to repeat the phrases after him over and over:

anything I want to be….

The only thing I need to do…

is to want to be something.”

While they were occupied screaming the chant, Frank would disappear, almost magically in a puff of smoke it seemed, leaving behind the message.

It made a huge impression on Bullock, and on countless others as well.

“He gave the most passionate, motivating, goal-oriented speech I’ve ever heard,” Bullock recalled. “And I’ve heard a lot of them. But I never forget what he said. It was a packed house. It was about staying in school. Working on your grades. Creating goals. Staying off drugs. And doing the right thing. That stayed with me for many, many years.

“I wrote him a letter when I graduated law school and I told him ‘Thank you for that wonderful speech. You don’t even know who I am but I was a little person in the crowd when you gave the speech.’ It just happened to be the right time when I needed to hear something like that.”

He told the graduates, “Hopefully, this might be the right time for some of you as you go forward in your career paths and in life.”

Bullock’s words triggered in me the thought that you never know when you might be a positive influence on someone else, either by your actions in persevering through difficult circumstances or motivating words at just the right time.

Frank Melton influenced him. Jonathan Bullock may have influenced someone in the crowd. Who knows who you and I can influence today.