Hinds Football - A Quick look back

As we enter the Centennial year of the existence of the institution now known as Hinds Community College, 2017, we spend lots of time looking back at our history.  For a brief moment, I'd like to illustrate the contrast of the sport we call football from almost a hundred years ago to today.

An old Hinds football team photo from 1924 has surfaced recently and is the oldest one of which I am aware. As they say, a picture is worth a thousand words. Taking a look at the sepia-tinted and faded photo produced by the photography company signed Garner-Jackson, you'll see many elements that tell their own stories. Some obvious, and others need a little elaboration.

In 1924, Hinds Community College (Hinds CC) existed only as Hinds Agricultural High School (Hinds AHS). So the A.H.S. Hinds Co. you see engraved over the football refers to that institution. Hinds did not exist as a college until the 1922-23 session when Hinds AHS was upgraded to junior college status for a freshman year of education. Soon after, sports activities and teams were set up, along with physical and military training, to allow the young men and women in school to keep physically fit during their eduational experience. Football, being a nationally popular sport in the early 20th century, was one of the organized sports that Hinds AHS also offered.

The two buldings in the background, which no longer exist, were the old main building, left, and the boys dormitory, right. There was also a girls dormitory that would be to the left of the old main building, and identical to the boys dorm. Believe it or not, of the original 10 structures in existence at the birth of the college in 1917, only the girls dormitory still stands, presently known as Pickett Hall. It's been renovated over the years but still looks the same on the outside as it did 100 years ago.

The ground where the players pose for the photo is the site where the old Cain Hall burned and Cain-Cochran Hall rose from its ashes and stands today as the centerpiece of the Raymond Campus, one of six locations now in the Hinds CC district. Looking at the ground one can notice that the turf is still remnant of the farm from which Hinds AHS was planted. The boys in this photo were required to work a few hours a week in their coveralls to help run the school. They could work extra hours for pay to cover their room and board if they chose.

The football uniforms were mainly what you see in the 1924 photo. Leather-head headgear and shoulder pads were also worn by some, but were not yet mandatory for all.

Most players in 1924 played both offense and defense, due to the lack of team members, unlike today where players specialize and only play one position. I doubt that weight training and modern-style drills were ever used back then. The agrarian lifestyle and lack of labor-saving devices or vehicles undoubtedly provided most of the athletes' physical exercise - with outdoor work and much more walking and hiking being a part of everyday life.

The single coach was a teacher who took on the extra duty as football coach. George F. McGowan was the Hinds AHS coach in the photo who also doubled as math teacher for the school. Recruiting was probably done by the coach and maybe the instructors or administrators. I don't have any information on that subject though I imagine it to have been a simple process, focusing on local talent. 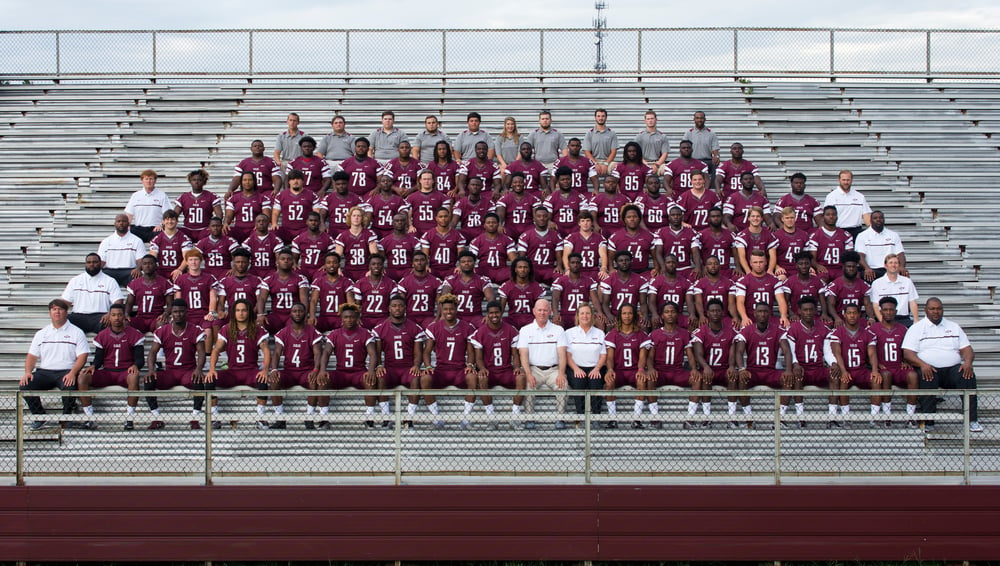 By contrast, the modern Hinds Community College football team is much larger in numbers than the first Hinds teams. Today's players specialize, focusing on learning the necessary skills to play one position. And now there are backups to each position, which results in much larger team size and numerous coaches who also specialize in teaching and training certain positions on offense or defense. And let's not forget the managers, cheerleaders, trainers and filmers who also help make up and support a football team.

Football players today are heavily recruited from all over the country using highly sophisticated computer software and monitoring systems, travelling to games, talking to coaches and parents, atttending skills camps, etc., etc. When a player gets admitted to a college footbal team, it's a big deal and he must be the cream of the crop from many high schools around the state and nation.

Today, football players wear special cleats, special padding on their knees, hips, backs, ribs, shoulders, chins, and a special helmet engineered to reduce impact injury and concussions. The material is blended to be slippery to defenders, aerodynamic to runners and strong and cool for the wearers. The athletes no longer have to work a Hinds farm, but they must be dedicated to working many hours on the practice field and spend many hours learning plays and reviewing films of opponents. And they need to keep their grades up if they want a scout to call them up to the next level. If they aren't called up by a scout, they must have an academic career plan to fall back on. Hind prepares them for a future life, not just a future in football.

The transition of Hinds from an agricultural high school with just a handful of career paths for high school students has grown into a junior college and now a community college with six locations on five campuses and offering courses and vocational programs for high school graduates seeking technical training or an academic education to be transferred to a university as well as learning experiences for career adults seeking continued education or career enhancement or change.

One hundred years has brought about much growth and change in Hinds football and in the school that educates its players now known nationally as Hinds Community College.