For a lot of students at Hinds, summer is a time for jobs and capturing some time off from studies after the grueling fall and spring semesters. Granted, many take summer courses to chip away at earning a degree…but I fell into that first category during my school daze, so it’s a familiar enough angle to take.

My own summer covering events for the Public Relations Department has turned up some inspiring moments, starting with graduation exercises held in May. I crossed paths with some exceptional people who had lived full lives working and raising families, yet had each their own reason for returning to school. 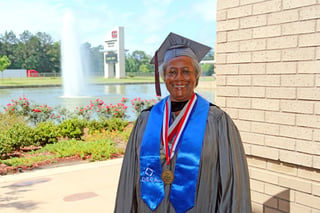 “I’m happy about finishing school after nearly 40 years,” graduate Vicki Colbert said, after earning a degree in culinary arts. “It was about letting myself know that it’s never too late to complete something.

Also earning degrees that day were Barbara Evans and Lattie Erving, who hadn't met each other before but had many a note to compare. 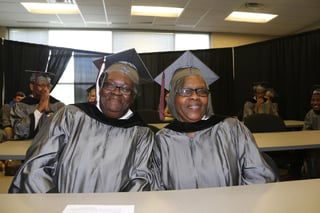 “I didn’t have an opportunity to go to college years ago,” Erving said. “I want to study social work with my degree.” Erving, of Jackson, and her newfound friend for the day, Evans, of Vicksburg,  earned their degrees after having been retired for years.

In June, I moseyed to Eagle Ridge Conference Center on the Raymond Campus without much expectation of anything noteworthy out of a leadership summit for students in the Minority Male Leadership Initiative, based at the Jackson Campus-Academic/Technical Center. What I got was a simple, yet powerful message about self-motivation from guest speaker Adonis Lenzy.

“No matter what people say to you, it’s what you say to yourself that really matters,” said Lenzy, of nonprofit Paradigm Shift. “There’s nothing wrong with looking at yourself in the mirror and saying ‘You can.’”

Most recently, my path crossed with Ruby Hardy, among those who were recognized in Cain-Cochran Hall on June 30 for having earned a High School Equivalency (what we used to call a GED) through Hinds. She did so as part of the MI BEST program, which trains for a job skill and helps students earn their certificate at the same time. We had met for a previous interview on the subject and I was intrigued by her backstory.

She had left home in Jackson decades ago – before her senior year of high school was up – to go to California, where she landed a job with Pacific Bell thanks to a federal jobs program.

“Back then, if you passed an entry-level test, you could just get a job and after about five years, you could move around,” she said. “Nowadays, the first thing they’ll ask you for is a GED or a high school diploma.”

Hardy, now 70, moved back to Mississippi a few years ago to care of her mother. She plans to pursue a degree in medical data technology and open a business. Most gratifying to be a part of was the Hinds family being more than that, if just for a few minutes.

I caught up with her after the ceremony as she turned in her cap and gown. She told me her all local family and friends had to work that afternoon, preventing them from making the ceremony. That made asking her to retrieve her gown and pose for a photo or three that much easier, if just to help her feel proud of that cerfiticate. After this next photo, she agreed with me about hitting up the TV station for a “finder’s fee” -- all in good fun, of course.

My job is finding out about inspiring students and faculty doing inspiring things at Hinds. It’s been quite a summer for that sort of thing, and it’s not over yet.