Become a member of the Twitterverse!

Tweet, tweet, tweet! No, it’s not a bird, or a plane, it’s Twitter! Twitter, (http://www.twitter.com), is a very popular social media tool that allows users to write brief text updates, no more than 140 characters, about what’s going on in their lives. Users can write or tweet about pretty much anything. Popular tweets, also known as trending topics, often come from news in the areas of entertainment, politics, technology and sports. An example of Twitter’s trending topics is shown below: 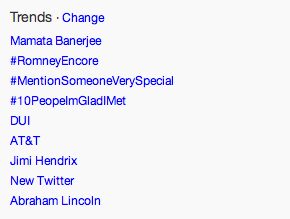 Twitter also allows users to find out what’s going on in the lives of others. By following family members, friends, companies and even celebrities, users can build up their Twitter feeds to receive tweets from a variety of people around the world. In addition to following others, users can interact with each other by retweeting (RTing) or reposting a user’s tweets, responding to a user’s tweet directly (indicated by starting the tweet with the @sign + twitterusername) and favoriting tweets. This interactive feature of Twitter is very unique and helpful because you can communicate with people on a level not necessarily possible in everyday life.

Another useful feature of Twitter is the ability to tweet images, links and videos. Users who include these types of media in their tweets are likely to attract more attention because their tweets are supplemented with additional information. For example, if you tweet about an upcoming event, you may not be able to include every detail about it due to Twitter’s 140-character tweet limit. However, if you include a link to the event website or a photo flyer in your tweet, you are able to overcome this limitation. As you use Twitter, you will notice all kinds of creative uses of links, images and videos to enhance tweets. Here’s a recent example of how Hinds CC used an image to introduce the 2012 Homecoming Court:

So, how does Hinds Community College  (@hindscc) use Twitter? We use Twitter to inform the Hinds community and general public about upcoming events, answer followers’ questions, share Hinds CC news, document student life and interact with our followers by retweeting and favoriting their tweets. Displayed below is a screenshot of the official Hinds CC Twitter page: 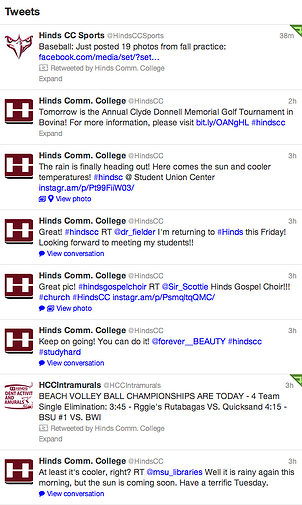 Now that you have a little more information about Twitter, sign up for an account and try it out! Be sure to follow Hinds CC on Twitter so you can keep up with the latest news, events and happenings around campus. Happy Tweeting Hinds family!