A few weeks ago Hinds Community College Honors instructor Dr. Ben Cloyd invited me to come speak to his Honors Forum class about my previous journalism career at The Clarion-Ledger. This was part of a series of talks by outside speakers on the importance of keeping up with news events.

The Honors Institute is a great program at Hinds especially for those cream-of-the-crop kids who want and need more intellectual enrichment. Led by Debbie McCollum and Dr. Cloyd, those kids get exposed to all kinds of great opportunities.

I felt like it was my duty to say yes, but then I spent the next week obsessing about it. Like a large portion of the population, I have a feeling of dread about any sort of public speaking. Maybe it’s because I spent six years in speech therapy as a child. Or maybe it’s because of that high school debate when I was asked if I agreed with the “status quo” and pretty much broke down in front of everyone because at the tender age of 14 I didn’t know what the term meant. (I said yes when I should have said no.)

At any rate, I typically go to great lengths to avoid speaking in front of a group that is larger than three or four.  I’m a writer, not a speaker. (And right now you may be wondering if I’m either, but I digress.) To my credit, I didn’t plead migraine at the last minute. I thought about what I wanted to say, thanks to the questions Dr. Cloyd provided me with, and I prepared a short hand-out.

It helped that it was a normal classroom in the Honors Center, not a larger lecture hall, and there were only about 18 students and Dr. Cloyd to witness any meltdown I might have. I was somewhat reassured.

As I began speaking to them, here’s what I thought I might see: 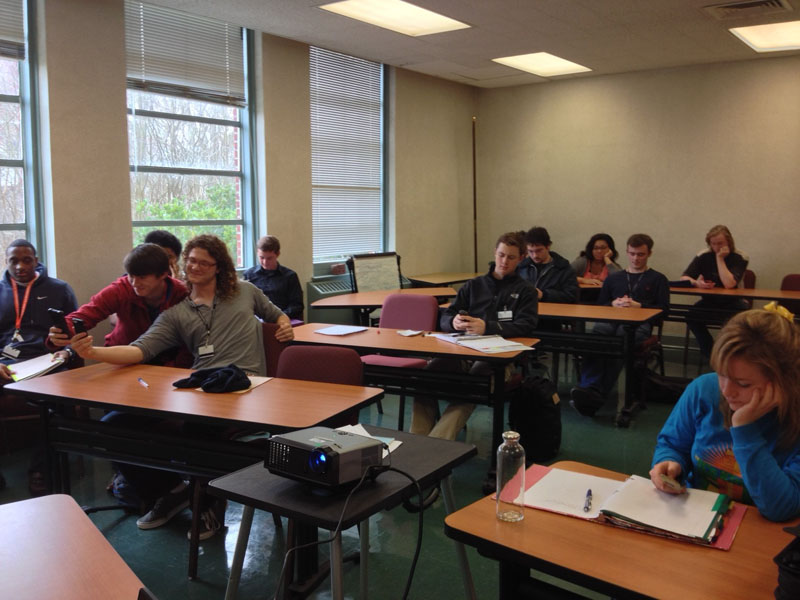 But I found myself a little surprised (I shouldn’t have been) that no one seemed to fidget and they were all looking at me as if they were engaged, not like I had two extra heads. No one appeared to be surreptitiously looking at their phones under the desk.

Here’s what I saw instead: 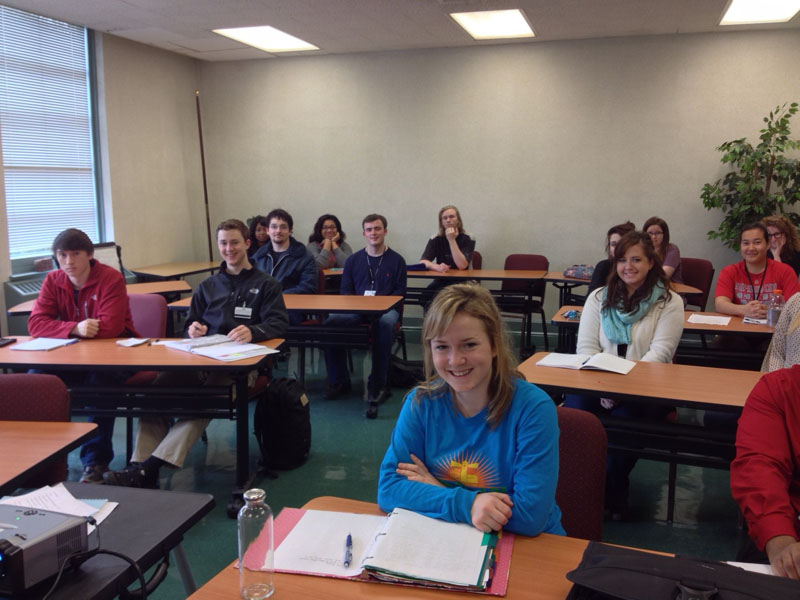 I was still wondering, however, if those interested-appearing faces were actually good masks and they were off in their heads someplace else. As it turned out, when I finally finished my spiel after about a half hour, they asked really great questions. One student asked how The Clarion-Ledger figures out what goes on the front page. I explained that when I was there news management had two meetings a day to figure that out, one in the morning and one late in the afternoon. And that a mix of stories is usually considered, hard news, breaking news and a nice reader piece.

Someone asked about Brian Williams and they laughed when, after I stumbled around for something coherent to say, I finally just came up with “I think he’s mentally ill.” I probably didn’t score any points, however, when someone asked me about good news sites to go to research a particular topic and I told them I just google and look for credible sources in the list that comes up.

One of the questions that Dr. Cloyd asked me to talk about was my career path and how I got to Hinds. The great thing about venturing out on a talk like this is that it gave me a chance to reflect on that and recall why I’m working at Hinds in the first place. Like a lot of life-changing decisions, there’s not a pat answer.  And it goes back to my time at The C-L.

In the 1980s I was editorial page copy editor at The Clarion-Ledger when The C-L merged with the afternoon Jackson Daily News. Out of that merger, a four-person education desk was created.  The newspapers won a Pulitzer Prize in 1983 for coverage of the Education Reform Act of 1982. From that moment on, I was sold on the value of the media in promoting quality education in Mississippi.

When I applied for a spot on the new education desk, one of the “big bosses” told me he was surprised because I was not writing for the paper at the time. I asked what I could do to further my chances since I was a dark-horse candidate for it. He suggested I write down some my ideas for education coverage.

Well, being somewhat of an overachiever, I took him very seriously. I looked through a lot of other newspapers to see what they were doing. I researched The C-L’s files (the morgue, it was called) to see what we were covering and not covering. I wrote up a several page proposal on how I would structure the education pages and divide coverage. Among other things, I suggested a regular Q-and-A column and argued for covering the 15 community colleges in Mississippi based on the numbers of students they served. I said something along the lines of here is this whole huge public education entity and we have no clue what they’re up to.

As it turned out, I got the position and wound up being assigned the Q-and-A column I proposed, called Ask Cathy, and the community college beat. That’s when I first got to know our president, Dr. Clyde Muse, and really learned about the role of the community colleges in educating Mississippians. When I decided to leave The C-L, I sat back and thought about where I would like to work and who I would like to work for. It turned out to be an easy decision.

If you haven’t figure out by now, I’m a happy camper working at a place whose mission it is to help all kinds of students fulfill their dreams and career goals, from an adult who needs to finish a high school diploma to a high-achieving student like those in Honors who are looking for a little extra intellectual stimulation.

For more information about Hinds’ Honors Institute, contact Debbie McCollum at dpmcollum@hindscc.edu. Or see our web page at http://www.hindscc.edu/admissions/studentlife/clubs/honors/index#gsc.tab=0