I have been dreading this blog post for the longest…time….partially because I didn’t have the slightest idea what I was going to write about.  Should I write about how shopping is my number one love or how I have started going to the gym so I can be beach ready for the summer?

I decided to write about how this California beauty ended up in the South, staying for a very long time, and working at an HBCU, a Historically Black Community and University, Hinds Community College’s Utica Campus. 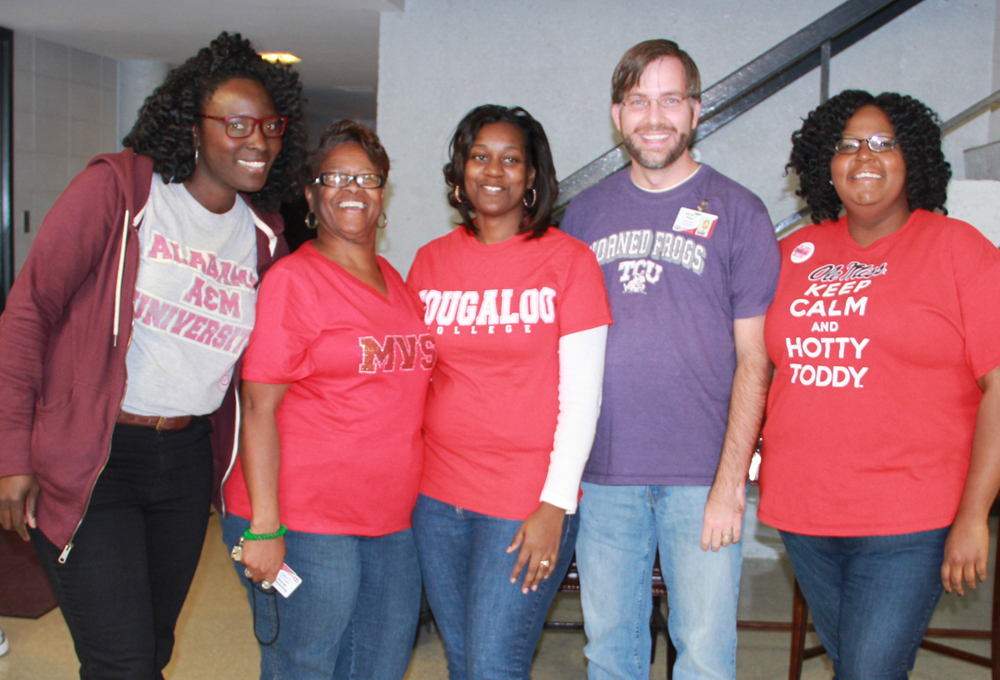 I'm on the far left with some of my Hinds Community College Utica Campus colleagues at a day showcasing our university alma maters.

In California, I was the exception. I wanted to attend an HBCU, I would tell people. “A what?” they would say. Slower I would say… An HBCU, Historically Black College and University. “A what?” they would say again. I found myself explaining to people what would become my normal and explain to them what an HBCU is and why I wanted to attend one after graduation.
Before African-Americans were allowed to attend many of the top universities and colleges in America, African-Americans had to be educated at colleges and universities founded and taught by people of color. There were some schools in the North and West that allowed African-Americans to attend but many HBCUs weren’t founded until after the American Civil War, so prior to them being open…well…
Aside from the importance they served in educating African-Americans, my cousin and several track coaches attended one and encouraged me to do the same.
After graduating high school a year early, my twin sister and I separated and went to different colleges — Berkley for her, Alabama A&M University for me.
I had no idea what to expect. I was so sure that I wanted to attend AAMU, I did not make a campus visit. My cousin had attended the school several years earlier, and I was sold on the fact that she loved it so much and had so many wonderful experiences that I was sure I would have the same experiences. And the same wonderful experiences she talked about on the close-knit campus, I had too.
Arriving on campus with a bustling super outgoing personality, I found myself lost among the many Southern Belles who were in no rush to get anywhere fast. My minute consisted of 45 seconds. I was always in a rush to get somewhere, but I wasn’t in California anymore.
Everything around me moved at a different pace. Time was slower. People were friendly. They waved and spoke to me without knowing my name or anything about me. Scary! We don’t do that in California.
My class sizes were intimate. I was a name and not my Social Security number, unlike my sister. My professors knew my name. I didn’t get lost among the crowd. I found lifetime friends, which really means I communicate with friends from college via Facebook more often than my un-real Facebook friends that I’ve managed to like and friend over the years.
After my time on “The Hill” I moved to Mississippi. I left Alabama without hesitation the same way I had left California years before. Since being here, I have established roots. I am often asked if I would return to California and I give the same reply every time, “No.”  I have found my way to another HBCU, not as a student but as a staffer — Hinds Community College Utica Campus.
The same attributes that I found at AAMU I see here. The students are names and faces. The faculty and staffers care about each other and more importantly, they care about the students. They go the extra mile to ensure students attend class. They work with them. I work with them. They talk to them. I talk to them. They mentor them. I mentor them. The same things I received in college, I find myself giving to the students here on the Utica campus.
What a jewel this HBCU is. There are so many awesome things happening on the campus it is hard to believe that people aren’t clamoring to get here in some capacity. There is history in the buildings and so many stories that can be and should be told about this campus. In the middle of nowhere sits a school that is responsible for educating some of Mississippi’s best!
So, I can’t leave right now, because I have yet to make my mark. In my current role I am in charge of promoting and showing this campus in its best light. I am assisting the vice president and former graduate of this college with ensuring that the legacy and history are shared as she continues to make strides and builder a bigger and stronger campus. I can’t leave Mississippi right now because I am a part of something that is big.
<< Previous Post
Next Post >>