Finally, the Hinds Community College softball team can see the lights "at the end of the tunnel " — for illumination at the new René T. Warren Softball Field. For the first time in the long history of the softball program, the Lady Eagles will be able to play games after dusk.

This is a huge and very impactful endeavor, and not just because it puts light on the field where there have always been none. But according to head softball coach, Mike Grzanich, "It's going to be unbelievable having lights for the first time. This will not only enable our players to stay in the classroom longer but will also help out in recruiting — with the ability to hold night events at our facilities."

I personally remember just two years ago, being in a Hinds class while finishing up my associate's degree, when the star softball pitcher who sat behind me had to miss so much of our 10 a.m. speech class because she had to get ready for a road trip or softball game for the Lady Eagles. At the time I wondered how many frustrated students and teachers we had due to players missing classes, and coaches not being able to schedule later games, because there were no lights on the softball field. This will no longer be an issue as games can now be played until midnight and beyond if ever necessary.

As Stage 2 of the construction progresses, more great features will be added to the René T. Warren field. In the plans for later stages are new dressing/locker room facilities for softball and baseball, a shared concession stand a press box and covered spectator seating that wraps around and behind the home plate. The new lights are another installment in the process of the completed vision. 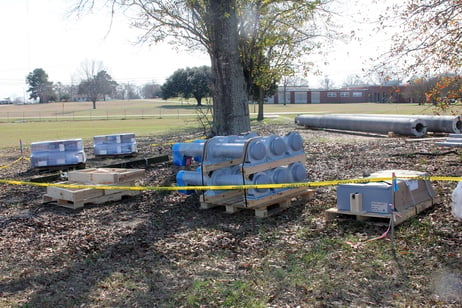 The poles, junction boxes and caps that hold the light fixtures before assembly. 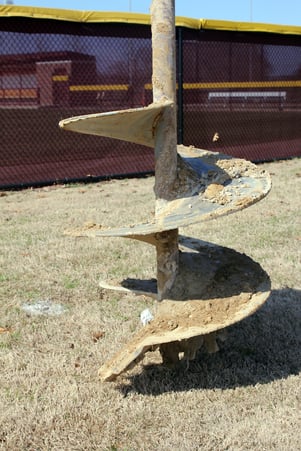 A large auger digs holes for fixture pole bases that will  be sunk deep underground.

These lights aren't just your run-of-the-mill metal halide stadium fixtures. They are being installed by Southern Electric and manufactured and supplied by Musco Lighting. According to Jason McKnatt of Musco, "Musco is the leading sports lighting manufacturer in world. We have provided lighting for sports venues around the world. This project is one of the first LED venues in the state of Mississippi. Other venues in the southeast that have Musco LED Lighting are AT&T Stadium home of the Dallas Cowboys, the Superdome, NRG Stadium home of the Houston Texans, Vaught Hemingway stadium at Ole Miss, and the Lake Pointe sporting community in Emerson, GA to name a few. The Hinds softball stadium will feature Musco's TLC LED 600 watt fixture and light levels will meet the NCAA recommendations for intercollegiate play. The facility will also save 70-80% in energy usage when compared to a traditional metal halide light source. The other benefit to this Musco technology is the reduction in spill light and the improved playability by reducing the glare that affects the play on the field. This is such an exciting project for Musco to be a part of and we look forward to seeing the Lady Eagles play under the lights." 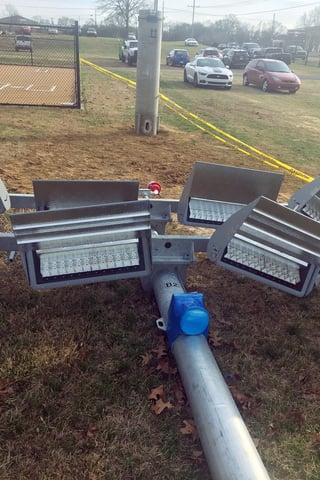 The LED light system uses advanced technology, such as a laser aiming system. The LED lamps are custom designed for the facility and preadjusted before installation using a laser that is mounted on each pole below the LED lamps. So when the pole and lamps fixture is raised and secured, it can be adjusted to the predetermined bench mark on the field, using the mounted laser to guide it, and all lamps are properly aimed on the field at once.

Photos of the LED lamps mounted on the poles. The photo on the right shows the laser aiming device, wrapped in blue plastic, beneath the LED lamps.

This particular lighting system is being installed for the first time in Mississippi and right here on the Hinds campus! LED lighting is replacing traditional lighting in the home, the workplace and now also on the athletic field. 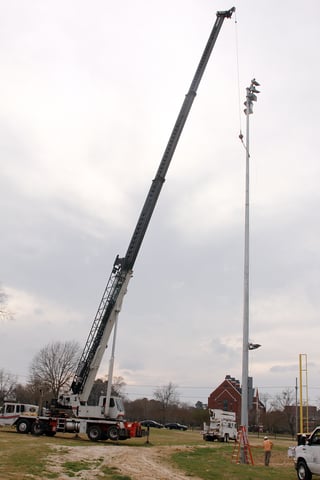 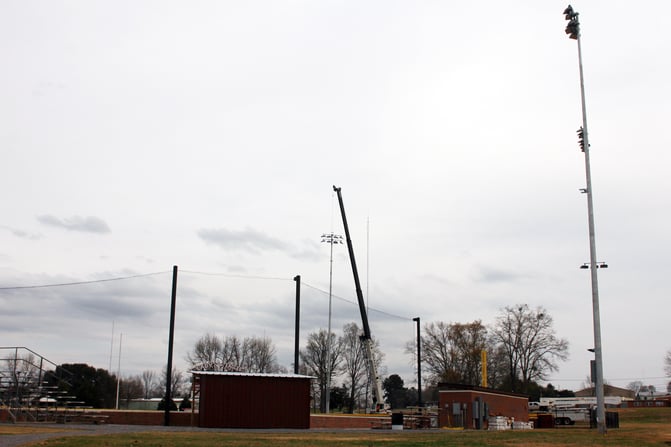 Photo on right shows 6 and 10 gauge wire being fished through junction box and underground to light poles. 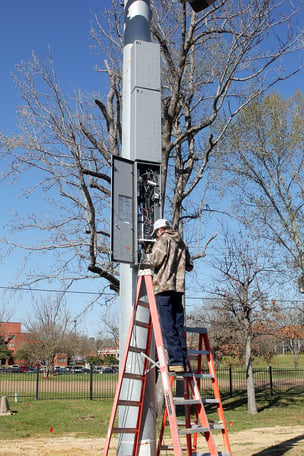 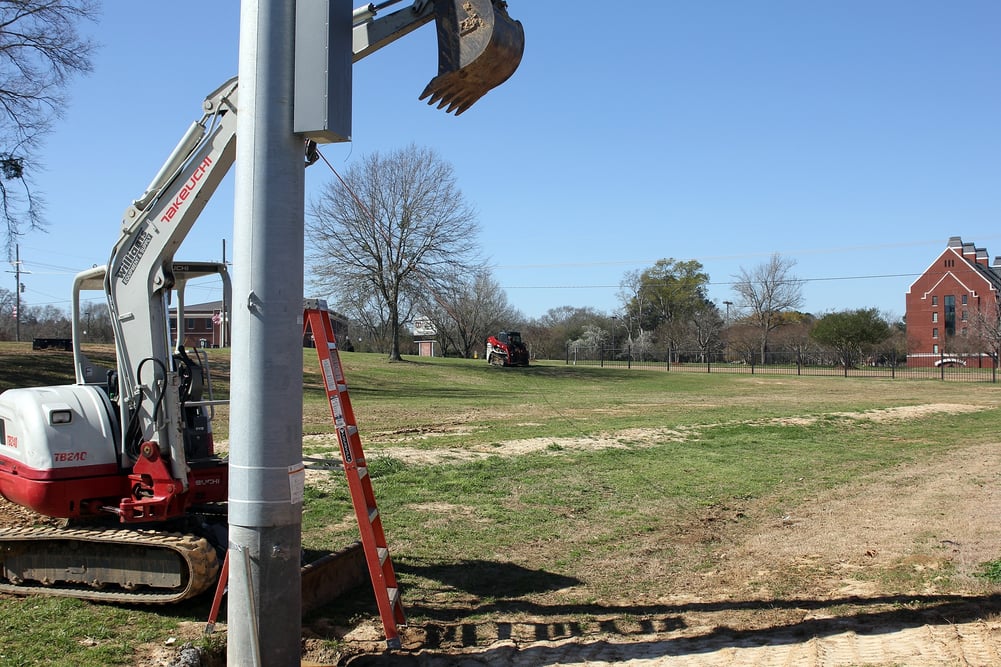 After wires are pulled through light poles, an electrician hooks them up at each pole junction box. Photo above shows vehicle in center, pulling rope which pulls wires through poles. 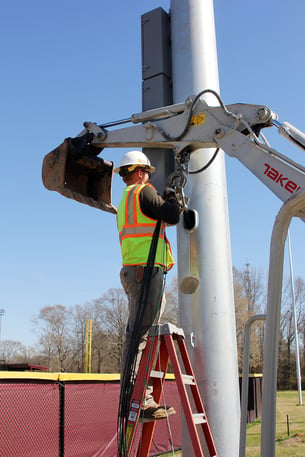 Wires being pulled underground and through light poles to junction box.

"The lighting of our new softball complex will be another step in the direction of making the Hinds CC softball facility second to none in the state community college system." - Gene Murphy, Hinds CC head football coach and athletic director

This blog entry is Part 1 of a two-part article. At this writing, the lights are not yet powered up and functional, but will     be within the week. Look for Part 2 to see how new LED field lights illuminate a new synthetic turf field in Mississippi.

Come on out and watch a Lady Eagles' night softball game and be one of the first people in Mississippi to experience the newest technology in field lighting as you enjoy a night out at the ballpark under the high-tech LED lights!