The "C" word Gala is now just a fond memory

It was a lot of fun but it is OVER!

That goes not just for what Jackie Granberry calls the “C” word – Centennial – but also the Nov. 4 Centennial Gala.

Hinds Community College spent 2017 celebrating “100 Years of Community Inspired Service,” wrapping it up with a Gala attended by more than 450 people. The proceeds all go toward a Centennial Endowment that will be used for student scholarships, faculty development and other future needs of the college.

The planning for the Gala went on for a number of months. It was spearheaded by Hinds employees Jackie Granberry and Colleen Hartfield, co-chairs of the Centennial Committee, Renee Cotton and decorator extraordinaire Judy Bufkin, who is talented beyond belief.  But quite a few of us played more minor roles in getting ready for it.

The day before the Gala, on Friday, Nov. 3, a number of us camped out at the Muse Center on the Rankin Campus doing everything we could do to get ready, including making bows to put on nearly 500 packages. When I was telling my daughter about this, she said, “Don’t you have event staff for that?” My answer: “Honey, with an event this big, we ARE the event staff.”

It took lots of planning and lots of hands in the mix, not only for the decorating but the program throughout the evening.

Hinds alumni Gov. Phil Bryant and his wife Deborah were the hosts for the Gala. The two of them met at Hinds, and one of the governor’s favorite stories is the one about him seeing this beautiful girl with long blonde hair and stalking (his word) her across campus. The Bryants seemed to have a great time at the Gala, with lots of laughter.

The Hinds family that was involved also had a lot of fun getting ready for it, including long discussions about the outfits we planned to wear. We did all clean up pretty well!

Thanks to PR photographers April Garon, Tammi Bowles and Evelyn Stewart, we have lots of photos, including a few outtakes, to commemorate the day.

Here is the story of our Gala preparation, told in photos. 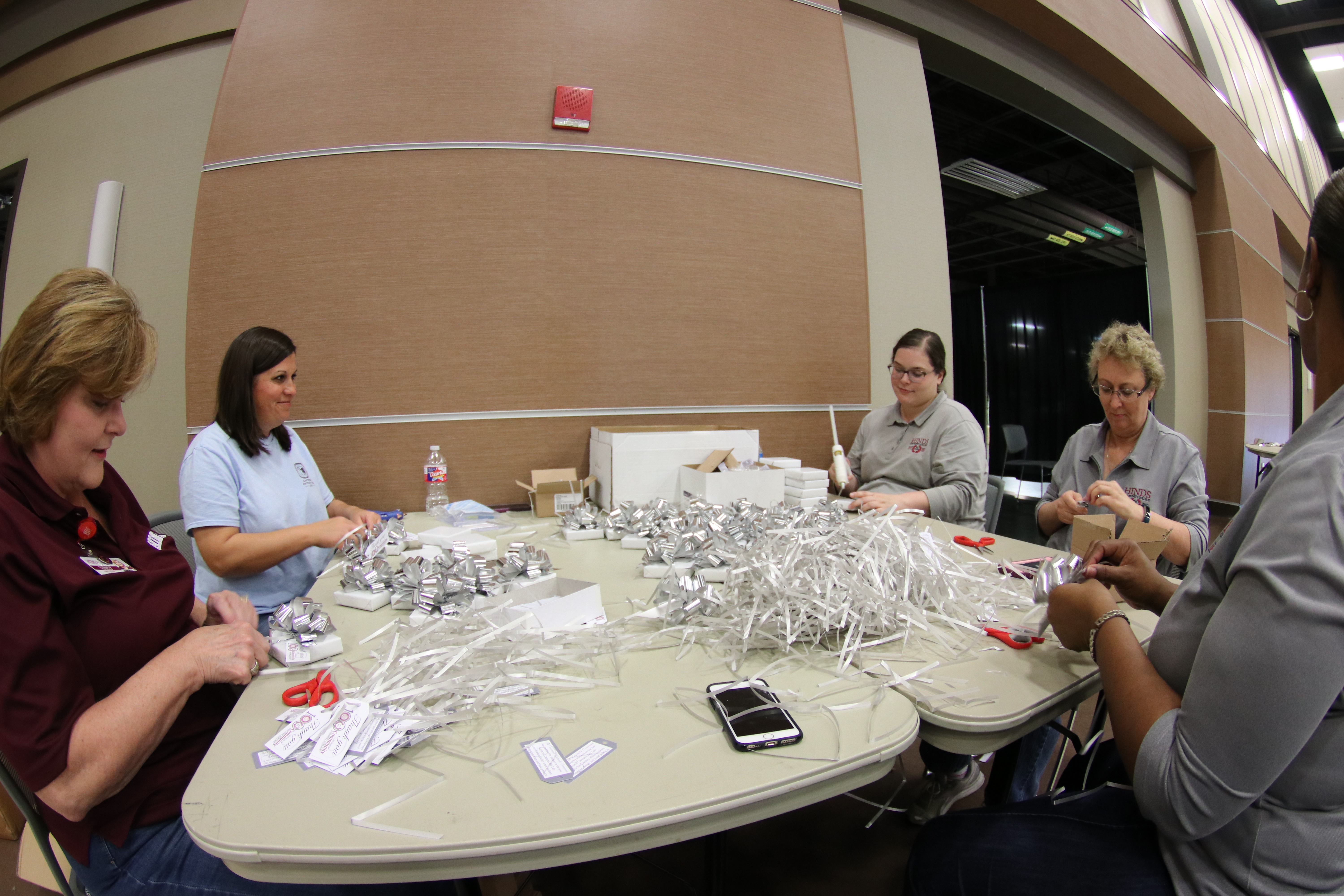 We spent an entire day making bows and gluing them to packages. I was all thumbs. 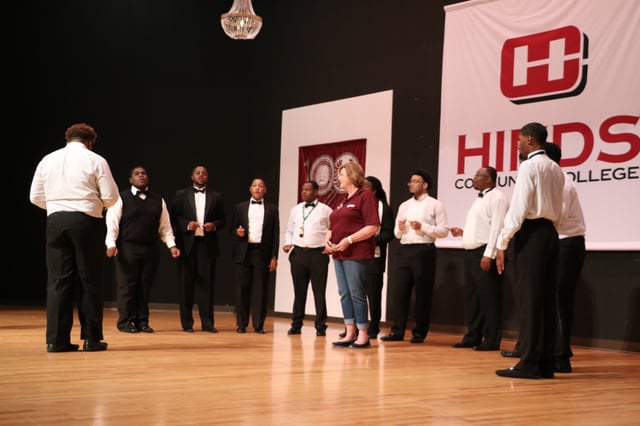 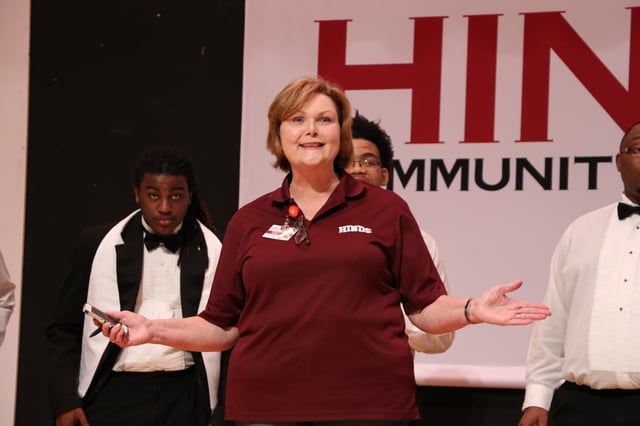 Colleen Hartfield was the stand-in for Mrs. Bryant during the rehearsal of "My Girl" sung by the Jubilee Singers. 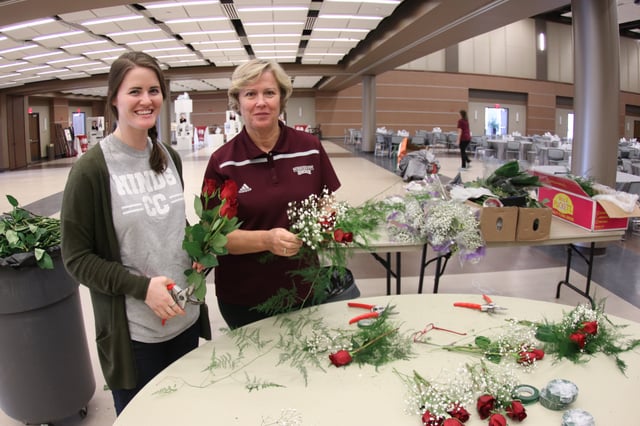 On Saturday, hours before the Gala, a huge group of us gathered for a photo. This wasn't nearly all of us!

The tables really looked great when we got them done! 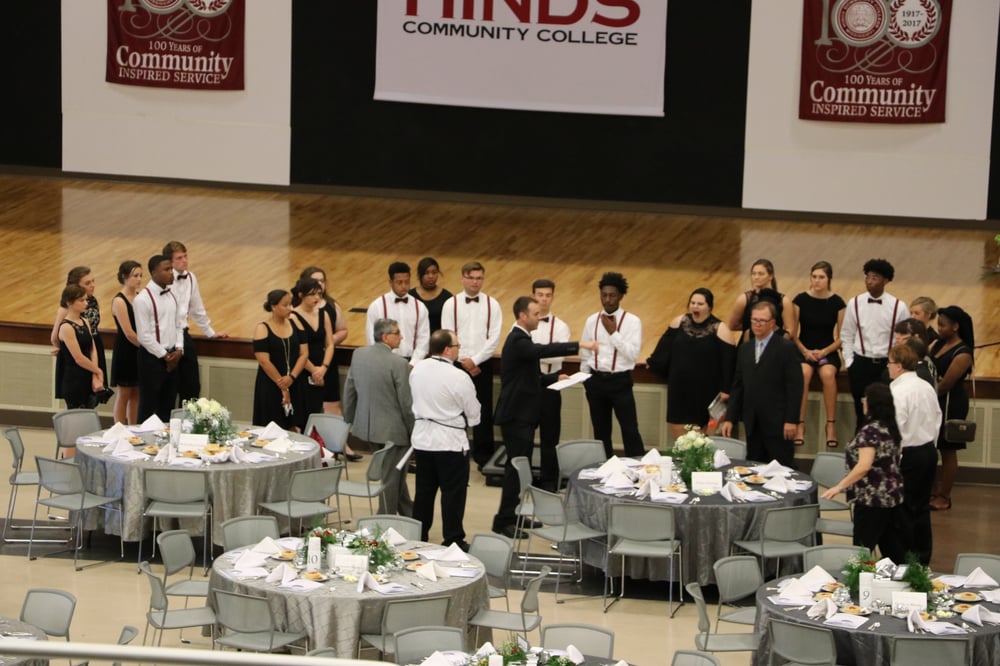 Mark Stanton gave Hinds Connection members, who were the servers, last-minute instructions with the help of our Valley partners. 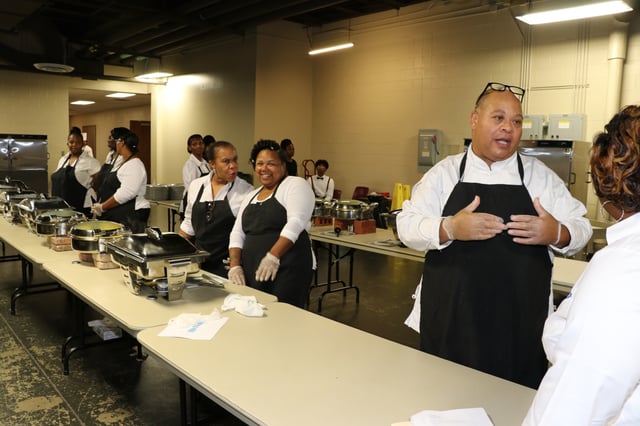 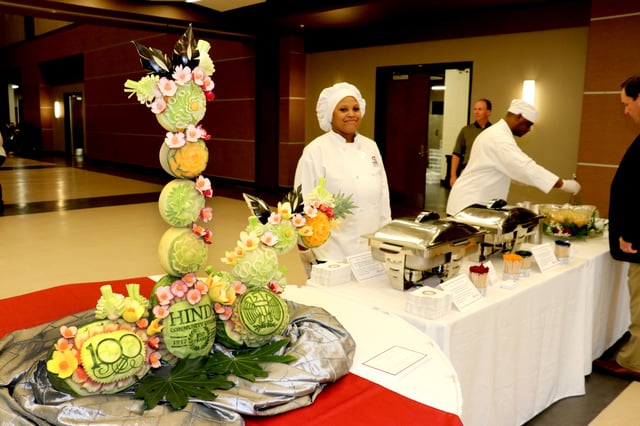 We love our Valley partners! And special thanks to John Hale for the great  carvings. 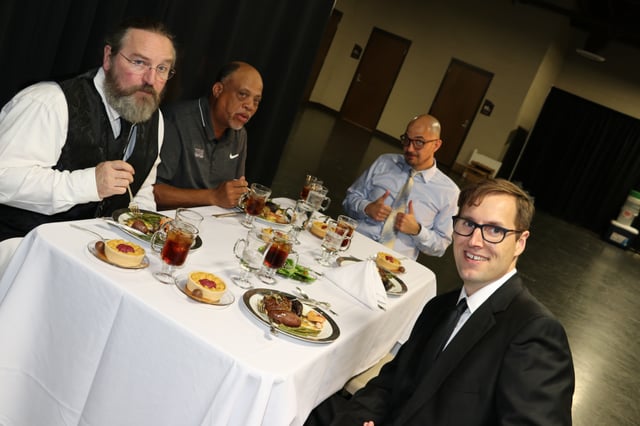 Worker bees Andy Williamson, Clifford Irving, Daniel Hawthorne and Jeremy Cole did get to eat first since they were busy throughout the program. Irving was back stage, the rest were in the sound booth. 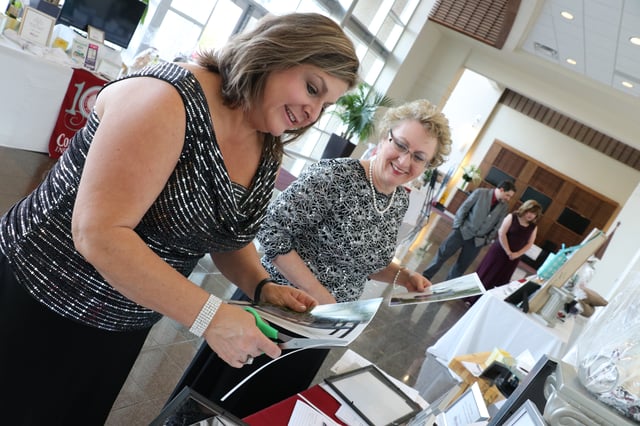 My "other half" at Hinds, Renee Cotton, had a hand in the Silent Auction preparation. 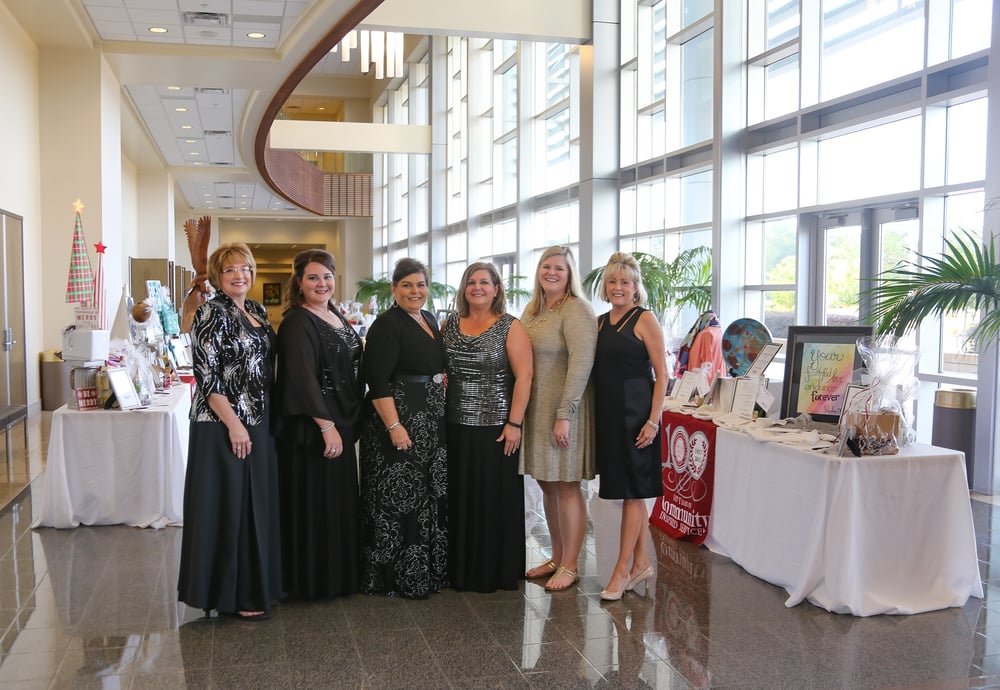 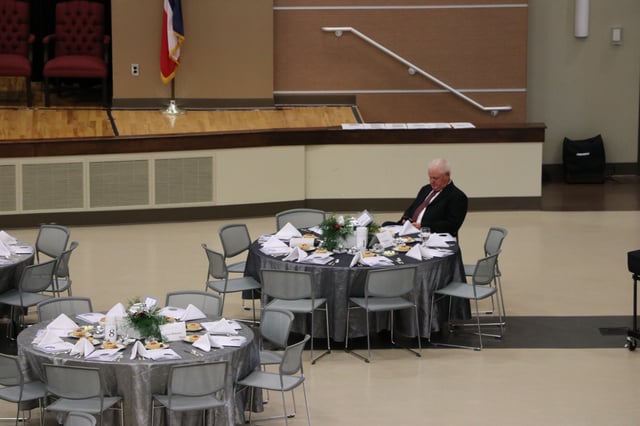 This lonesome looking guy is Kenny Granberry, married to Jackie Granberry, co-chair of the Centennial Committee.

And below is Jackie Granberry. Enough said about that. 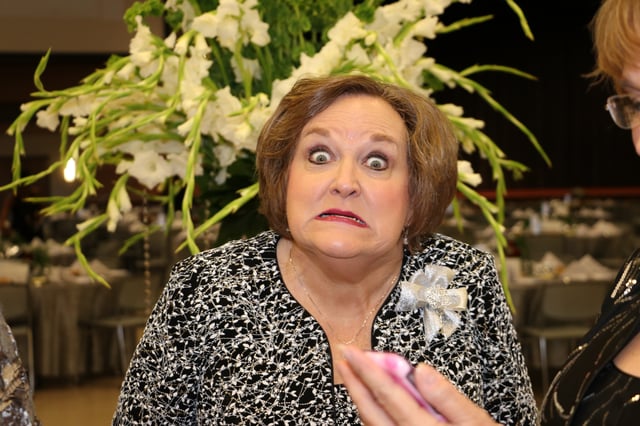 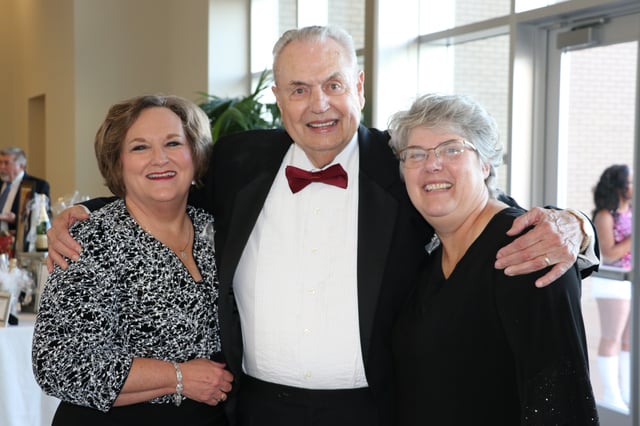 But seriously...Here is Jackie Granberry, President Dr. Clyde Muse and the talented Judy Bufkin who came up with the decorating scheme. 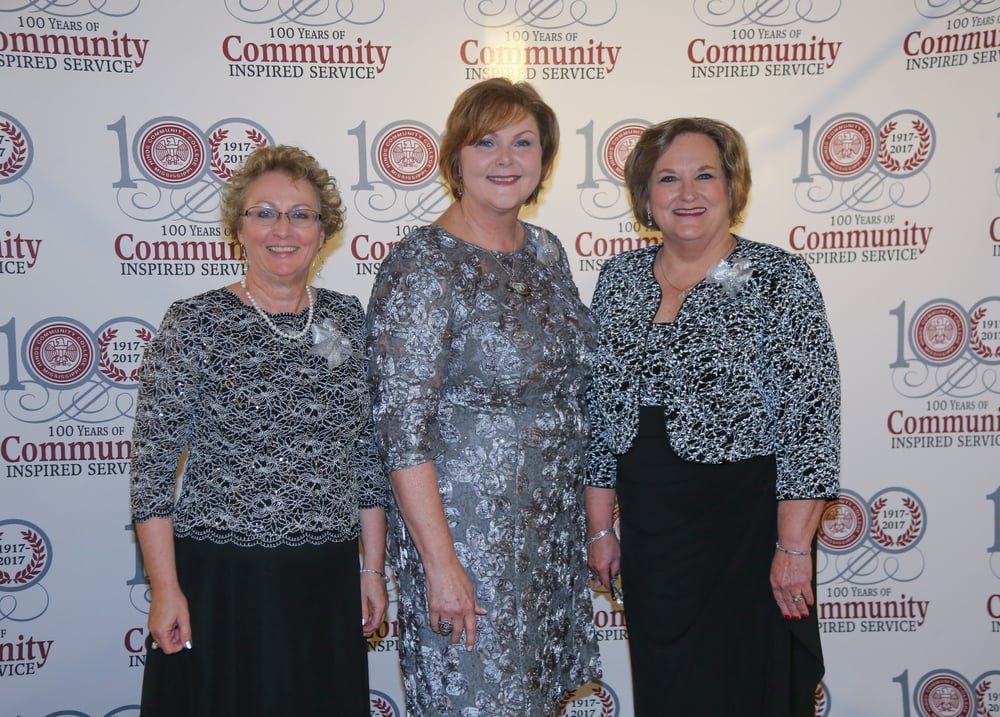 And here I am with the Centennial Committee co-chairs Colleen Hartfield, middle, and Jackie Granberry, right.

And lastly, the three ladies below were responsible for documenting what a great time we had at the Gala: April Garon, left, Evelyn Stewart and Tammi Bowles. They did a phenomenal job! 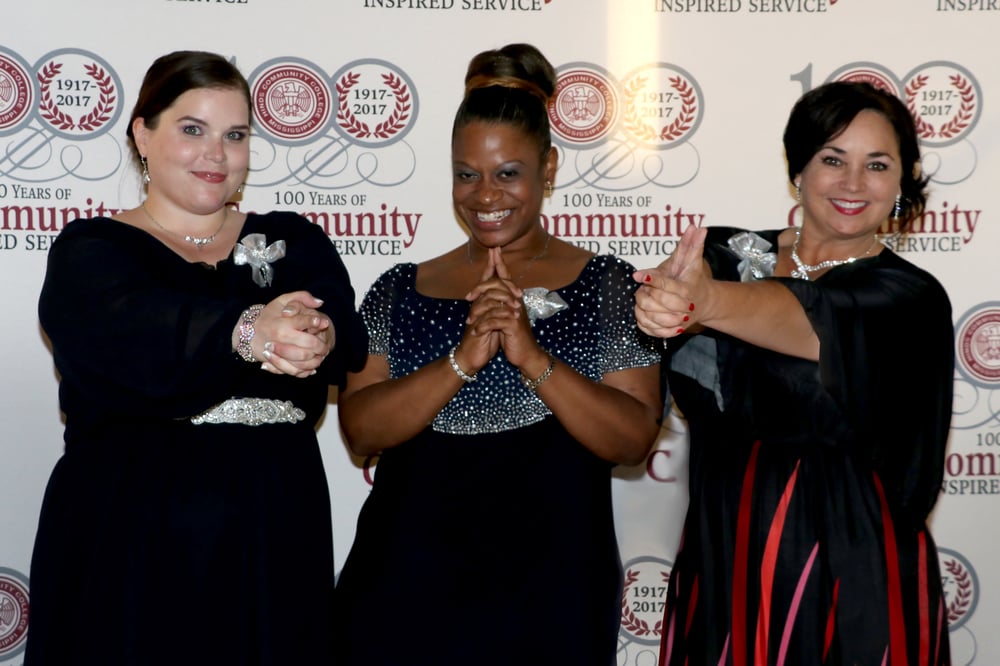