Reporter 101, Hinds CC version: Stay out of the way of the photographer

I have had a fun time this week razzing some of my colleagues. Let me explain.

We had a super event on Sept. 26, a joint event with Empire Truck Sales and Stribling Equipment in Richland. Hinds Community College, represented by our President Dr. Clyde Muse, signed a memorandum of understanding with Empire and Stribling, represented by their CEO Jerry Swanson, to provide training at the Diesel Technology Academy on Highway 49.

It took about two or three years to put together this business partnership that allows us to train technicians to work on heavy equipment or diesel trucks to fill a huge need that Swanson’s companies have.

Gov. Phil Bryant was there and said a few words about the partnership. He has been busy in recent days crisscrossing the state talking about workforce endeavors.

But I suspect a huge reason he made sure he was available for this event was not because he is a Hinds graduate, which he is, but because his dad was a diesel mechanic who worked for Empire Truck Sales as his last job. He spoke eloquently about going on Saturday calls with his dad when someone’s rig was broken down on the side of the highway. His memory is that no matter how tough the job, his dad always managed to get the rig going again. The governor clearly has great respect for today’s version of the diesel mechanic.

As you can imagine, our multimedia specialist April Garon took tons of photos at this event. She, communications specialist Danny Barrett Jr. and I come from the print journalism world. When I was at The Clarion-Ledger as an education reporter, I was trained well by our photographers, including my best running buddy Barbara Gauntt, to stay out of the way of the photographer.

The rule – OK, maybe it wasn’t true but I wasn’t taking any chances – was that reporters who got in the way of the photographer and got in the newspaper would be fired. I covered schools. My purse sitting on a bookcase or a student’s desk may have gotten in a few photos in The C-L but you can bet I didn’t get into any of them I wasn’t supposed to be in. I didn’t want to lose any photographer friendships, nor did I want to risk one of the top editors firing me. I learned to watch the angle of the photographer. And if I didn’t remember, you can be sure one of them would be motioning for me to MOVE! out of the way.

Fortunately, I managed not to get in the background of too many photos at our Diesel Technology Academy event. And I was easily cropped out of the main one I did manage to get in. Yeah, that's me behind Dr. Muse's shoulder. 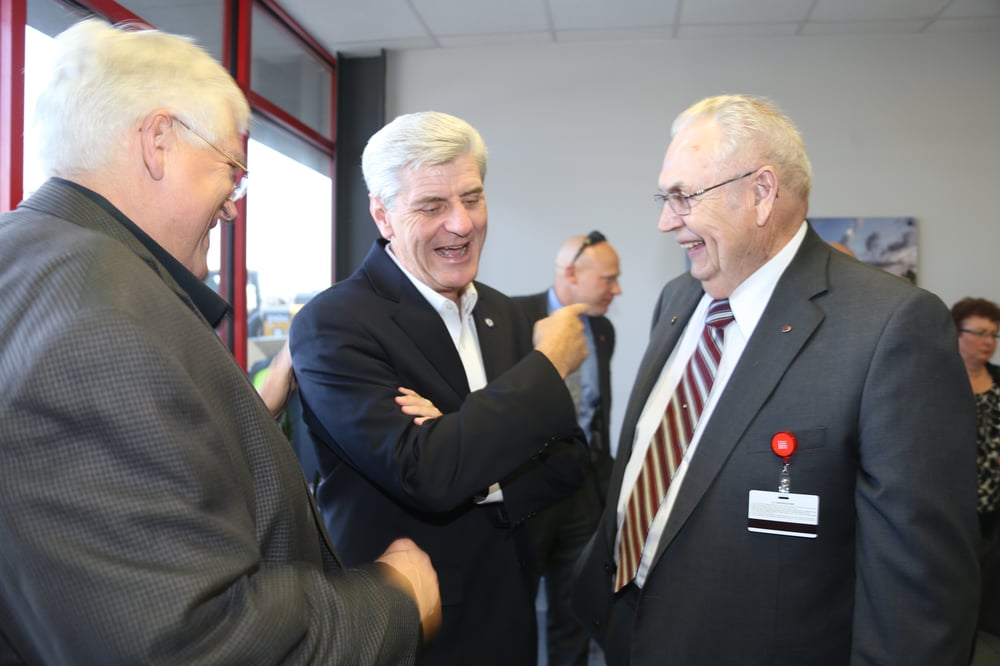 However, some of my colleagues, let us say, were not quite so aware. I don’t blame them. They don’t have the journalism background and they haven’t had the years of admonishment from higher-ups and friendly photographers. To steal a phrase from “Leave it to Beaver” – you know, that 1960s sitcom – I have been “giving them the business” this week about their being in the background of photos.

I’m not going to embarrass them by mentioning their names. They already know who they are. But below is one of the photos I’m talking about. Perfect set-up behind the governor speaking at the podium and the students in front of the truck, with the audience on the left.

I’ll leave it to you to play “Where’s Waldo.”